During 2010 we prepared a piece of land high above the main house to start a small goat herd. The motivation was to use the land to better effect, to create a fire break and to enlist the help of the goats to keep the land clean. We fenced in an area of terraces on a steep hillside at the centre of which is a substantial old 2 story house. The house has been serviced with electricity and mains water. In the process of cleaning the area we found a large underground water reservoir built of brick and stone. We have re-instated this as part of a grey water system, collecting rain from the roof.
In early May 2011 we were finally ready for the goats. We bought 4 female and one male young adult Garfagnana goats. One of the females was pregnant. 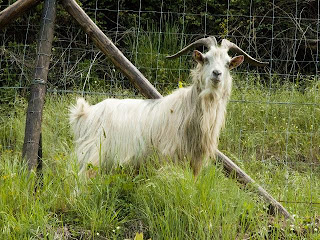 Initially, they seemed to settle quite quickly. I had been told repeatedly how easy goats are to look after and this seemed to be true. What I was not told was just how much mischief they can get up to! 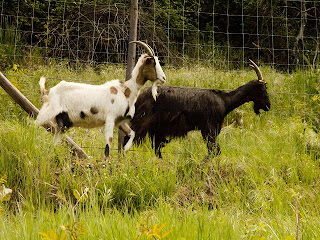 The first sign of this was when I arrived one morning to find the veranda of the goat house flooded in water. The goats had managed to turn on a water valve from the grey water tank and drain it onto the veranda floor! I moved the tap our of easy reach and hoped for rain to re-fill the tank. I should have saved my prayers. 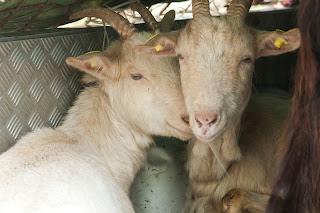 2 days later I arrived to find the goats had found another valve, this time leading from mains water to the grey tank. They had re-filled the tank with fresh water and I arrived to find the overflow gushing!
I removed all the water valve levers and that seems to have cured that problem.
All the goats were using the ground floor of the goat house. I was reserving the upper floor room (with an entrance at the back of the building) for storage. It had not yet been cleaned out and was filled with 30 years of accumulated junk. I pushed the door closed securing it with light wire.
The goats had other ideas. 3 of them butted their way in and then pushed the door shut behind them. As the door opens inwards, they were now stuck inside. I'm not sure how many hours they were there, but during that time they turned everything upside down, including a pot of dark brown wood preservative left there by the builders. They then proceeded to lie in the preservative, turning their beautiful white coats dark brown. It took about 2 weeks for it to fade.
The fence was built superbly by 2 local artisans. It consists of wire fencing with about 15cm squares. It seemed impossible for the goats to get into any trouble living inside it. But they soon discovered that they could just get their heads and horns through the squares to nibble the vegetation outside (although there was ample inside). The problem was that once out, they couldn't get their heads back in. They were stuck by the horns which would slip through because the horns curve backwards, but would not come out. I spent the next 3 weeks repeatedly releasing stuck goats. And they didn't learn. One goat in particular stuck its head through regularly 3 or 4 times a day. In the meantime we ordered and erected an extra layer of fencing with much smaller squares.
But my compensation came when the pregnant goat delivered in late June. 2 beautiful white kids. Unfortunately the nanny rejected one of them and would not feed it. With some difficulty we began bottle feeding. 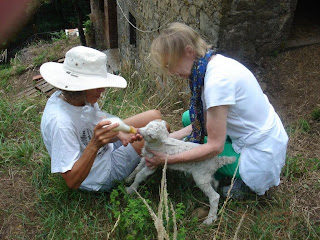 All seemed to go well for 3 days but the mother would have nothing to do with it. 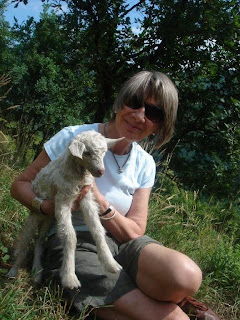 Then suddenly on the 4 day, the kid which had been frisky and feeding well stopped taking anything. I saw the nanny butt the kid a couple of times and toss it about 4 feet up once. We took the kid down to the house to continue hand feeding, but to no avail. It slowly slipped away during the next 12 hours. I'm sure it has sustained an internal injury.
The second kid has thrived. It is remarkable how the nanny could be such a bad mother to one kid and such a good mum to it,s sister.